Six years ago, Jennifer Valls de los Reyes stepped foot into Trans-Border for the first time. This past weekend, at the behest of her superiors and colleagues, and with her signature smile on her face, Jenny accepted the 2018 Greatest Professional Growth award. 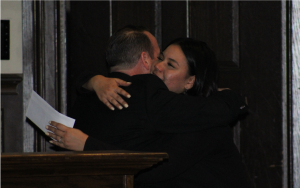 Jenny began her time at Trans-Border in the air export operations department, then to import operations, where she was able to prove her skills. Armed with a wealth of knowledge and a gregarious personality, Jenny moved into the role we know her in today – import pricing manager.

As you can imagine, though, this is not Jenny’s first leadership role here at Trans-Border. Jenny was integral in this year’s holiday celebrations, including organizing the office gift exchange and assisting with decorating. “Participating is important,” Jenny said, going on to explain that she feels participating in company events is vital, especially when not directly related to business.

If you ask Jenny what she believes made her stand out this year, she’ll say it’s because she’s a “master typer” and can type the entire alphabet without looking. But, really, she attributes her win to her growth in leadership. “There’s so much more you face throughout a day as a manager,” Jenny said, explaining that she really came into herself as a leader in the past year. 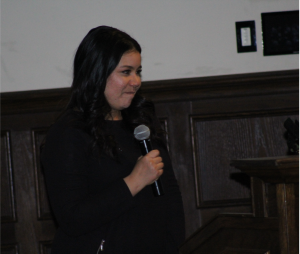 And, she explains that she would’ve never gotten where she is today without a few key people, including Trans-Border’s leadership. “Having engaged owners, like we do, is something I truly love about this company.”

Above all else, Jenny owes it all to her inspiration: Mom and Dad. With tears in her eyes and pride in her voice, Jenny goes on to tell the story of her mother, an immigrant, and father, a veteran, who, together, built their own lives and forged their own paths. “They gave me everything they ever could,” she says, going on to describe her family’s journey from Oklahoma, and then to Plattsburgh, before settling locally in Clifton Park.

“No regrets, only good or bad mistakes.” Jenny’s life motto tells you exactly why she won this award – she’s constantly learning and getting better.