Employee of the Year 2018 – Kelly Jackson

“And the employee of the year for 2018 is… Kelly Jackson!” As the roomed erupted in applause, Kelly made her way up front to accept her well-deserved recognition. Through hard work and dedication, as well as a newly found entrepreneurial spirit, Kelly was able to shine throughout 2018.

Kelly started her journey at Trans-Border 10 years ago in the air export operations department. Once Kelly got her feet wet, though, there was no stopping her. Three years later she found herself managing the entire air export department which, back in 2016, was separate from ocean exports. 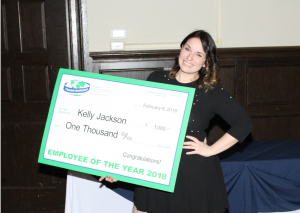 After a short time managing that department, Kelly grew into the role we see her in now: Dangerous Goods & Project Manager. Kelly acts as the in-house expert on all dangerous goods requests, and even now supervises two other dangerous good specialists. Additionally, Kelly is a project manager assisting with business processes, most notably acting as one of the key administrators for our newly implemented CargoWise system.

Kelly is easily one of the busiest people in the company. Even so, she finds time to take on additional leadership roles, such as serving as the TSA security coordinator, as well as organizing Trans-Border’s yearly freight shipment of high school band instruments to and from the United Kingdom for the London New Year’s Day Parade.

Kelly explained that her favorite parts of working at Trans-Border are the challenges she gets to solve and the feeling of accomplishment she receives from assisting our clients. She says she owes it all to her daughter, whom is her joy and inspiration. “I want to be someone that she can look up to,” Kelly explains. “She’s really what motivates me to keep growing.”

We could not think of a better employee to represent us throughout 2018 and beyond and are so proud of Kelly and all she has accomplished. “Patience is key,” Kelly closes with, “I believe that is what really set me apart this past year.”